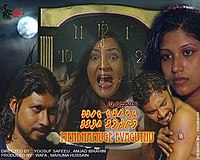 A group of ten friends gather at a haunted house to watch a horror film. The screened film revolves around four friends who observe a rash of red bumps on their skin once they narrate a true terror incident that had happened on Addu Link Road.