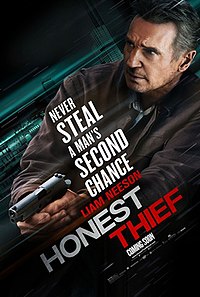 Honest Thief is a 2020 American action-thriller film directed by Mark Williams, from a screenplay by Williams and Steve Allrich. The film stars Liam Neeson, Kate Walsh, Jai Courtney, Jeffrey Donovan, Anthony Ramos and Robert Patrick, and follows a former bank robber who turns himself into authorities, only to be set up by them.

Sneaking around Boston for years, Tom has become a master thief, earning the nickname the "In-and-Out Bandit" for his slick ways when it comes to stealing large amounts of money. When he meets Annie, a psychology graduate student working at a storage unit facility, his heart melts, commencing a relationship that lasts a year before he's ready to commit to something more. Ready to turn himself in to the FBI in exchange for a short sentence, Tom also wants to live peacefully with Annie. The feds don't immediately believe Tom is the In-and-Out Bandit, with Agent Baker blowing him off, sending underlings to conduct an interview with the criminal.