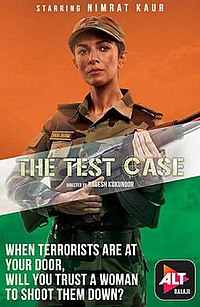 The Test Case is a 2017 Hindi web series, directed by Vinay Waikul and Nagesh Kukunoor and produced by Endemol Shine India for the ALTBalaji app. It stars Nimrat Kaur, Akshay Oberoi, Atul Kulkarni, Rahul Dev and Anup Soni in lead roles along with Juhi Chawla in a guest appearance. The web series is about the main character training to be the first woman test case in a combat role, within the Indian Army. The basic story of this web series is inspired from the 1997 American film G.I. Jane.

Protagonist Captain Shikha Sharma (Nimrat Kaur) is the only woman in a group of Indian Army officers training to join the Special forces. She is also the first woman to be undertaking the course making her a "test case" for inducting women into combat oriented roles in the Indian army. The storyline revolves around her journey of overcoming challenges at home to biases by her colleagues despite being an intelligent and a highly motivated individual.