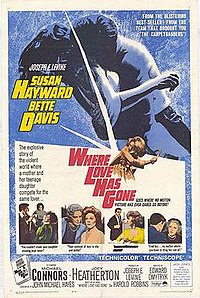 Where Love Has Gone is a 1964 American Technicolor drama film in Techniscope made by Embassy Pictures, Joseph E. Levine Productions and Paramount Pictures. It was directed by Edward Dmytryk and produced by Joseph E. Levine from a screenplay by John Michael Hayes based on the 1962 novel of the same name by Harold Robbins. The music score was by Walter Scharf, the cinematography by Joseph MacDonald and the costume design by Edith Head.

The film begins with headlines stating that 15-year-old Danielle Miller (Joey Heatherton) has murdered a man, Rick Lazich, who was the latest lover of her mother Valerie Hayden (Susan Hayward). Dani's father, Luke Miller (Mike Connors) describes the events that led to the tragedy.