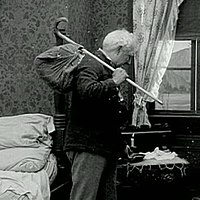 Granddad is a 1913 American film directed by Thomas H. Ince.

Mildred lives with her grandfather, Civil War veteran Jabez Burr, who she loves deeply. One day she receives a letter from her father saying that he has remarried. Mildred's stepmother finds out that Jabez is a heavy drinker and starts to get worry about he's closeness with Mildred and soon takes a dislike to him. To avoid more frictions Jabez decided to leave. He tells his granddaughter that he is happy and working in a farm, but the truth is that he is staying at the County's Poor House.