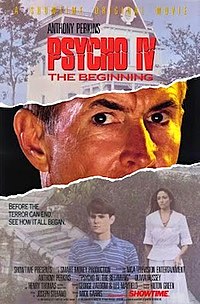 Psycho IV: The Beginning is a 1990 American made-for-television horror film directed by Mick Garris that serves as both the third sequel and a prequel to Alfred Hitchcock's Psycho, as it includes both events after Psycho III while focusing on flashbacks of events that took place prior to the original film. It is the fourth and final film in the original Psycho series.

A once-again rehabilitated Norman Bates is now married to a psychiatrist named Connie and is expecting a child. Norman secretly fears that the child will inherit his mental illness, so he must seek closure once and for all.