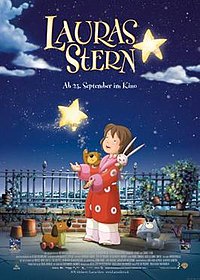 Laura's Star is a 2004 German animated feature film produced and directed by Thilo Rothkirch. It is based on the children's book Lauras Stern by Klaus Baumgart. It was released by Warner Bros. Pictures under the Warner Bros. Family Entertainment label.

Laura is a seven-year-old country girl, who just moved along with her family to a big city. On her first night in her new neighborhood, she sees a shooting star falling to Earth. Laura finds the star in a park and discovers that it is a living being. The star had severed one of its points during its crash landing. Laura takes the star back home, in order to reattach its point with a band-aid.