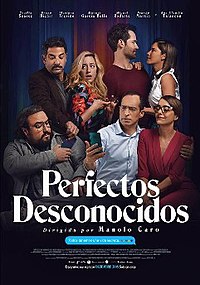 Perfect Strangers is a 2018 Mexican comedy film directed by Manolo Caro. It is an adaptation of the 2016 Italian film. The film premiered on 25 December 2018, and stars Bruno Bichir, Mariana Treviño, and Cecilia Suárez. The plot revolves around seven friends who gather for dinner and agree to participate in a game where they will have to read all the messages on their cell phones. Giving rise to a series of discussions and misunderstandings knowing all unexpected truths.