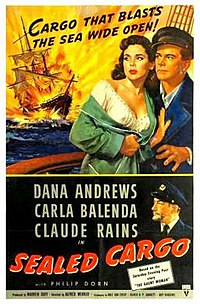 Sealed Cargo is a 1951 American war film about a fisherman, played by Dana Andrews, who gets tangled up with Nazis and their U-boats. Other major cast members are Claude Rains, Carla Balenda and Philip Dorn. Andrews' brother Steve Forrest has a small, uncredited part, one of his earliest screen roles. The movie was based on the novel The Gaunt Woman by Edmund Gilligan.

In 1943, at the height of the World War II Battle of the Atlantic, Captain Pat Bannon, skipper of the fishing trawler Daniel Webster, unloads his catch in his home port of Gloucester, Massachusetts. He reluctantly agrees to transport Margaret McLean to Trabo, a small community in Newfoundland. Shorthanded, he hires Danish sailor Konrad, and the Daniel Webster sails for the Grand Banks fishing grounds. Once at sea, another Dane, Holger, reports that the radio has been sabotaged. As Bannon knows all of the crew well except for Konrad and fellow Dane Holger, he suspects one of them or even Margaret of being a German agent.