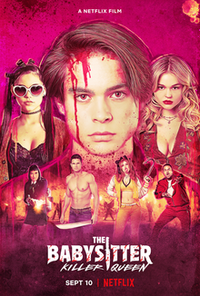 The Babysitter: Killer Queen is a 2020 American comedy horror film, directed and produced by McG, from a screenplay by McG, Dan Lagana, Brad Morris and Jimmy Warden. It is a sequel to the 2017 film The Babysitter and stars Judah Lewis, Emily Alyn Lind, Jenna Ortega, Robbie Amell, Andrew Bachelor, Leslie Bibb, Hana Mae Lee, Bella Thorne, Samara Weaving, and Ken Marino. The film continues the story of Cole Johnson, now in his junior year of high school, who must again fight to ensure his survival over one night, as he is hunted by demonic enemies, both old and new.

Two years after a satanic cult led by his former babysitter Bee tried to kill him, Cole is now a junior in high school. He is unable to convince anyone, except for his best friend Melanie, of Bee's life-threatening plot; his parents and most others think he had a psychotic break. He discovers that his parents have enrolled him in a psychiatric school, and he escapes with Melanie alongside her new boyfriend Jimmy, and their friends Boom-Boom and Diego to join a lake party.