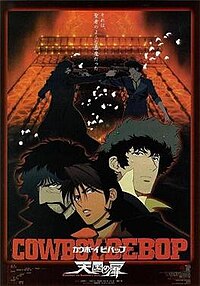 Cowboy Bebop: The Movie is set on Mars in 2071, 49 years after Earth was mostly abandoned after a catastrophe. Humanity has settled on other planets and moons in the solar system. The film's protagonists are legalized bounty hunters who travel together on the spaceship Bebop. They are Spike Spiegel, a former associate of the Red Dragon crime syndicate; Jet Black, a former police officer and owner of the Bebop; Faye Valentine, a woman who was once a fugitive from bounty hunters; Edward Wong Hau Pepelu Tivrusky IV (Ed for short), a girl with genius computer skills; and Ein, an artificially enhanced "data dog" with human-level intelligence.