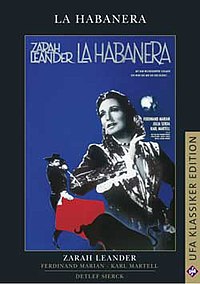 La Habanera is a 1937 German romantic melodrama feature film directed by Detlef Sierck (later known as Douglas Sirk). Zarah Leander, who was recently signed by UFA, stars, in the lead role of Astrée Sternhjelm and also performs its title song, "La Habanera". Like many of her films of this era, it proved an enormous box office success.

In 1927, Swedish tourists Astrée Sternhjelm and her elderly aunt Ana are nearing the end of a visit to Puerto Rico. Ana despises the island, which she considers backwards, but Astrée is enchanted by the Caribbean climate, the openness of the islanders, and the local habanera music. Astrée is especially taken with Don Pedro de Avila, a rich and powerful landowner they meet on their last day on the island. Don Pedro invites the women to a bullfight, where he heroically jumps into the ring after the matador is injured, and kills the bull himself. The next day, as their ship sails back to Sweden, Astrée spontaneously decides to stay. She runs down the gangway and finds Don Pedro waiting for her. They are soon married.