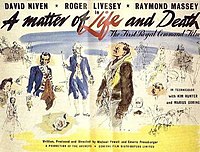 A Matter of Life and Death is a 1946 British fantasy-romance film set in England during the Second World War. Written, produced and directed by Michael Powell and Emeric Pressburger, the film stars David Niven, Roger Livesey, Raymond Massey, Kim Hunter and Marius Goring.

On 2 May 1945, Squadron Leader Peter Carter, an RAF pilot, is flying a badly damaged and burning Lancaster bomber over the English Channel, after a mission over Germany. Carter is expecting to die, after ordering his crew to bail out, without revealing to them that his own parachute has been destroyed. The only radio operator receiving him is June, at a USAAF base on the coast of England. For a few minutes Carter converses with June, before jumping from the Lancaster without a parachute.