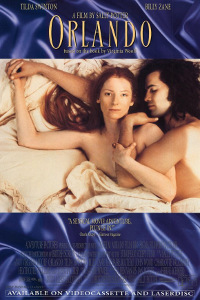 Orlando is a 1992 British period drama film loosely based on Virginia Woolf's 1928 novel Orlando: A Biography, starring Tilda Swinton as Orlando, Billy Zane as Marmaduke Bonthrop Shelmerdine, and Quentin Crisp as Queen Elizabeth I. It was written and directed by Sally Potter, who also co-wrote the music for the film (with David Motion).

The story begins in the Elizabethan era, shortly before the death of Queen Elizabeth I in 1603. On her deathbed, the Queen promises an androgynous young nobleman named Orlando a large tract of land and a castle built on it, along with a generous monetary gift; both Orlando and his heirs would keep the land and inheritance forever, but Elizabeth will bequeath it to him only if he assents to an unusual command: "Do not fade. Do not wither. Do not grow old." Orlando acquiesces and reposes in splendid isolation in the castle for a couple of centuries, during which time he dabbles in poetry and art. His attempts to befriend a celebrated poet, however, backfire when the poet ridicules his verse. Orlando then travels to Constantinople as English ambassador to the Ottoman Empire, and is almost killed in a diplomatic fracas. Waking up seven days later, he learns something startling: he has transformed into a woman.