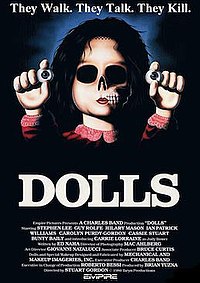 Dolls is a 1987 American horror film directed by Stuart Gordon, written by Ed Naha, and starring Stephen Lee, Guy Rolfe, Hilary Mason, Ian Patrick Williams, and Bunty Bailey. Its plot follows six people who seek shelter during a storm in the mansion of an elderly puppetmaker and his wife, only to find that the various puppets and dolls in the home contain the imprisoned spirits of criminals. It was produced by Charles Band and Brian Yuzna, through Band's Empire Pictures.

A violent thunderstorm strands young Judy, her father David, and her stepmother Rosemary in the gothic English countryside. Seeking shelter, the trio break into a nearby mansion, where they meet the owners, a kindly older couple named Gabriel and Hilary Hartwicke. Learning that Judy has "lost" her beloved doll Teddy (in fact, the cruel Rosemary threw Teddy into the bushes), Gabriel gives Judy a Mr. Punch doll. Three more people arrive at the mansion, also seeking shelter from the storm: good-natured Ralph and English hitchhikers Isabel and Enid. Gabriel invites them all to stay the night.