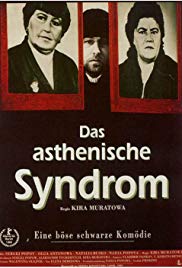 The Asthenic Syndrome is a 1990 Soviet drama film directed by Kira Muratova. It was entered into the 40th Berlin International Film Festival where it won the Silver Bear - Special Jury Prize.

The film consists of two unrelated stories: one is shot in black-and-white and the other in colour.