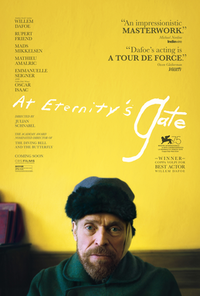 At Eternity's Gate is a 2018 biographical drama film about the final years of painter Vincent van Gogh's life. The film dramatizes the controversial theory put forward by van Gogh biographers Steven Naifeh and Gregory White Smith, in which they speculate that van Gogh's death was caused by mischief rather than suicide.

Vincent van Gogh seems to always be in artistic and emotional exhaustion. He is occasionally enraptured by his aesthetic responses to the landscapes around Arles; he renders them in oil on canvas or in a sketch pad using his own style of creating his work in a single, rapid sitting. When not in the countryside, he paints inside a yellow room in a yellow house. He begins to contemplate the fleeting nature of some subjects of still life. He also thinks about seasonal flowers and the artistic process which renders a permanent and eternal quality to the representation of flowers on canvas, which does not wilt and wither.