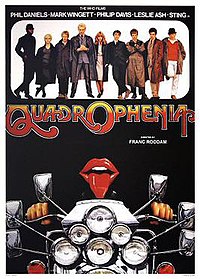 Quadrophenia is a 1979 British drama film, loosely based on The Who's 1973 rock opera of the same name. It was directed by Franc Roddam in his feature directing début. Unlike the adaptation of Tommy, Quadrophenia is not a musical film, and the band does not appear live in the film.

In 1964, Jimmy Cooper (Phil Daniels) is a young London Mod, disillusioned by his parents and a dull job as a post room boy in an advertising firm. Jimmy finds an outlet for his teenage angst by taking amphetamines, partying, riding scooters and brawling with Rockers, accompanied by his Mod friends Dave (Mark Wingett), Chalky (Philip Davis) and Spider (Gary Shail).