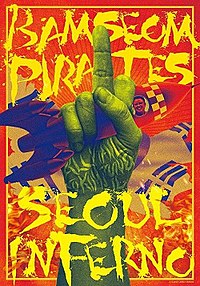 Bamseom Pirates Seoul Inferno is a 2017 South Korean music documentary film directed by Jung Yoon-suk. It follows the exploits of South Korean punk band Bamseom Pirates' two controversial members, drummer Gwon Yong-man and bassist Jang Seong-geon, as they kick back against government censorship and society hypocrisy. It premiered at the 2017 International Film Festival Rotterdam, where it emerged as one of the most popular film of the festival with audience giving the film a 4.5 out of 5 ratings. It also won the Grand Prize at the 5th Wildflower Film Awards 2018, becoming the first documentary film to win the Grand Prize.