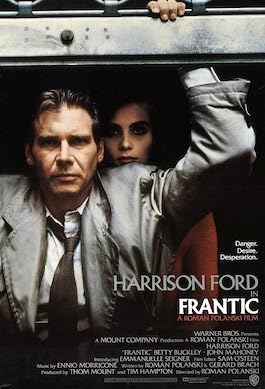 Frantic is a 1988 American-French neo-noir mystery thriller film directed by Roman Polanski and starring Harrison Ford and Emmanuelle Seigner. The film score is by Ennio Morricone.

Dr. Richard Walker (Harrison Ford) is a surgeon visiting Paris with his wife Sondra (Betty Buckley) for a medical conference. At their hotel, she is unable to unlock her suitcase, and Walker determines that she picked up the wrong one at the airport. While Walker is taking a shower, Sondra receives a phone call that Walker can't hear and she mysteriously disappears from their hotel room.