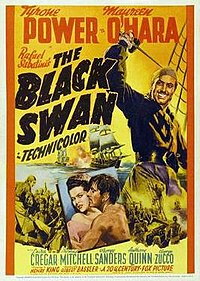 The Black Swan is a 1942 American swashbuckler Technicolor film directed by Henry King, based on a novel by Rafael Sabatini, and starring Tyrone Power and Maureen O'Hara. It was nominated for a total of three Academy Awards, and won the award for Best Cinematography, Color. It was based on the 1932 novel of the same title by Rafael Sabatini.

After England and Spain make peace, notorious pirate Henry Morgan (Laird Cregar) decides to reform. As a reward, he is made Governor of Jamaica, with a mandate to rid the Caribbean of his former comrades, by persuasion or force if necessary. He replaces the former governor, Lord Denby (George Zucco), but is not trusted by either the lawful residents or the pirates.