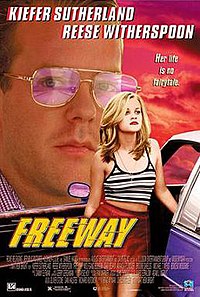 Vanessa Lutz is a poor, illiterate teenage girl living south of Los Angeles. Her mother, Ramona, is arrested in a prostitution sting, and her stepfather, Larry, is taken into custody on drug and child abuse charges. Social worker Mrs. Sheets comes to take Vanessa away, but Vanessa handcuffs her ankle to a bed and runs away. She takes Mrs. Sheets' run-down car and plans to go live with her grandmother in Stockton. Along the way, Vanessa stops to see her boyfriend Chopper Wood, a local gang member, to tell him about her trip, and he gives her a gun to sell upon arriving at her destination. Minutes after Vanessa leaves, Chopper is killed in a drive-by shooting by rival gang members. Later, Bob Wolverton, a counselor at a school for boys with emotional problems, picks her up on the side of the highway after her car breaks down and offers to take her as far as Los Angeles, where he is headed.