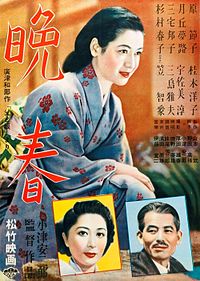 is a 1949 Japanese drama film, directed by Yasujirō Ozu and produced by the Shochiku studio. It is based on the short novel Father and Daughter (Chichi to musume) by the 20th-century novelist and critic Kazuo Hirotsu, and was adapted for the screen by Ozu and his frequent collaborator, screenwriter Kogo Noda. The film was written and shot during the Allied Powers' Occupation of Japan and was subject to the Occupation's official censorship requirements. It stars Chishū Ryū, who was featured in almost all of the director’s films, and Setsuko Hara, marking her first of six appearances in Ozu’s work. It is the first installment of Ozu’s so-called “Noriko trilogy”—the others are Early Summer (Bakushu, 1951) and Tokyo Story (Tokyo Monogatari, 1953)—in each of which Hara portrays a young woman named Noriko, though the three Norikos are distinct, unrelated characters, linked primarily by their status as single women in postwar Japan.

Professor Shukichi Somiya (Chishu Ryu), a widower, has only one child, a twenty-seven-year-old unmarried daughter, Noriko (Setsuko Hara), who takes care of the household and the everyday needs—cooking, cleaning, mending, etc.—of her father. On a shopping trip to Tokyo, Noriko encounters one of her father's friends, Professor Jo Onodera (Masao Mishima), who lives in Kyoto. Noriko knows that Onodera, who had been a widower like her father, has recently remarried, and she tells him that she finds the very idea of his remarriage distasteful, even "filthy." Onodera, and later her father, tease her for having such thoughts.