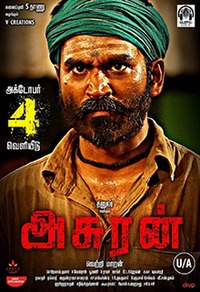 Asuran is a 2019 Indian Tamil-language period action drama film written and directed by Vetrimaaran and produced by Kalaipuli S. Thanu. The film is based on Poomani's novel Vekkai. The film stars Dhanush and Manju Warrier, where the latter makes her Tamil debut. G. V. Prakash Kumar scored the music for the film, renewing his collaboration with Vetrimaaran. Cinematography was handled by Velraj, with editing by R. Ramar. The film's plot is influenced by the real-life Kilvenmani massacre that occurred in 1968.

In the late 1970s Tirunelveli, a man and a boy are trekking across a river, carrying homemade bombs. In another part of the village, a woman, man and a girl are also hiding from the police.