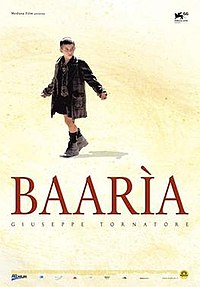 Baarìa is a 2009 Italian film directed by Giuseppe Tornatore. It was the opening film of the 66th Venice International Film Festival in September 2009.

The film recounts life in the Sicilian town of Bagheria (known as Baarìa in Sicilian), from the 1930s to the 1980s, through the eyes of lovers Peppino (Francesco Scianna) and Mannina (Margareth Madè).