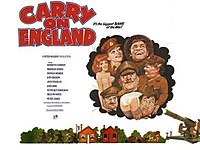 Carry On England is a 1976 British comedy film, the 28th release in the series of 31 Carry On films (1958–1992). It was released in October 1976 and featured Carry On regulars Kenneth Connor, Jack Douglas, Joan Sims and Peter Butterworth. It was second and last Carry On film for Windsor Davies, Diane Langton and Peter Jones, as well as the fifth and last for Patricia Franklin and the eighth and last for Julian Holloway. Patrick Mower, Judy Geeson and Melvyn Hayes make their only appearances in a Carry On film.

Captain S Melly (Kenneth Connor) is put in charge of an experimental mixed-battery during the darkest days of the Second World War. It is a relief for Captain Bull (David Lodge) to greet his relief but Melly is not prepared for the ball-squeezing Sergeant Major "Tiger" Bloomer (Windsor Davies) and the randy antics of Bombardier Ready (Jack Douglas), Sergeant Tilly Willing (Judy Geeson) and Sergeant Len Able (Patrick Mower). Forever feigning illness or hiding in their underground "snoggery", the troops are happily getting to grips with each other rather than the enemy. Most prominent of the females is Private Alice Easy (Diane Langton) who tries to charm her new commanding officer but only succeeds in propelling her top button into his system! Private Jennifer Ffoukes-Sharpe (Joan Sims) pines for "Tiger" while everybody – including little Gunner Shorthouse (Melvyn Hayes) – gets a piece of the action. Even after a tip-off to the medical officer, Major Butcher (Julian Holloway) segregation and rigorous training, the unit is still a shower. However, an inspection by the cowardly Brigadier (Peter Jones) and Major Carstairs (Peter Butterworth) is interrupted by an airborne attack and Melly's troops finally prove they are real British bulldogs.