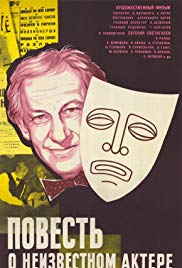 Story of an Unknown Actor 1977

Story of an Unknown Actor is a Soviet drama film directed by Aleksandr Zarkhi in 1977.

Pavel Pavlovich Goryaev, middle-aged actor. For many years, he played in the provincial theater on lead roles. The director of the piece based on the play, written for Goryaev, takes a young actor for his role. Goryaev first falls into despair, leaves the theater, makes an appeal to his friends. After a while, he digests what happened and realizes it's time to leave the scene adequately.