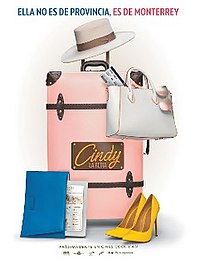 Cindy La Regia is an upcoming Mexican comedy film directed by Catalina Aguilar Mastretta, and Santiago Limón. The film it is based on the character created by Ricardo Cucamonga, and is stars Cassandra Sánchez Navarro as the titular character. It is scheduled to premiere on 25 January 2020.

When Cindy (Cassandra Sánchez Navarro), the most strawberry girl in San Pedro, Nuevo Leon, she tells her boyfriend "El Gran Partidazo" that she doesn't want to marry him, she runs to Mexico City, where new friendships and unexpected paths. And that's where they teach her that the possibilities of her life and her talent are much more than she imagines.