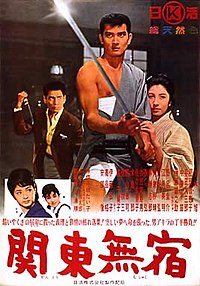 is a 1963 Japanese yakuza film directed by Seijun Suzuki and starring Akira Kobayashi, Chieko Matsubara, Daizaburo Hirata and Hiroko Itō. It was a programme picture produced by the Nikkatsu Company to fill out the second half of a double bill with Shohei Imamura's The Insect Woman. The film was based on a novel by Taiko Hirabayashi and had been previously adapted to the screen as Song from the Underworld (1956) by Suzuki's mentor, Hiroshi Noguchi. The story involves Katsuta, a yakuza member who falls in love and is torn between giri (duty) and ninjo (humanity). The Kanto of the title refers to a large plain on which Tokyo is located.

Three schoolgirls are infatuated with a yakuza, Katsuta, of the Izu Clan. They meet another yakuza, "Diamond" Fuyu, of the rival Yoshida clan. As he gets a tattoo, two of the girls become squeamish and run off but Hanako, the best friend of the daughter of Sota Izu, boss of the Izu clan, stays to watch. She is intrigued with the yakuza world. Fuyu takes her to an illegal gambling den where Tetsu, a dealer, takes a liking to her. The police raid the den and Hanako is arrested but let off with a warning. Later, Tetsu runs into Hanako on the street and convinces her to help him pull a variant of the badger game, a scam in which, with the promise of sex, she is to lure a man to a hotel room where Tetsu will extort money from him by threat of blackmail. The scam fails when the man chases Testu off and Hanako is left stranded with the man.