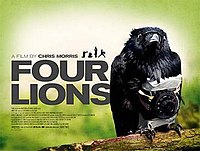 A group of radicalised young British Muslim men aspire to be suicide bombers. They are Omar (Riz Ahmed), who is deeply critical of Western society and interventionism; his dim-witted cousin Waj (Kayvan Novak); Barry (Nigel Lindsay), a bad-tempered and extremely rash white convert to Islam; and the naive Faisal (Adeel Akhtar), who tries to train crows to be used as bombers. While Omar and Waj travel to an al Qaeda-affiliated training camp in Pakistan, Barry recruits a reluctant fifth member, Hassan (Arsher Ali). The training trip ends in disaster when Omar attempts to shoot down an American drone and accidentally destroys part of the camp; the pair are forced to flee. However, Omar uses the experience to assert authority on his return to Britain. Omar and Waj don't trust Hassan when they first meet him at the airport, but Omar reluctantly chooses to allow him to join the group instead of murdering him to stop him exposing the plan.