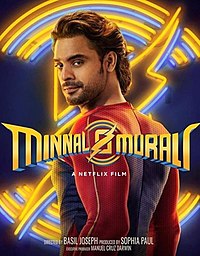 Minnal Murali is an upcoming Indian Malayalam-language superhero film directed by Basil Joseph. The screenplay is written by Arun Anirudhan and Justin Mathew. The film is produced by Sophia Paul under the banner of Weekend Blockbusters. The film stars Tovino Thomas in the title role along with Guru Somasundaram. Principal photography began on 23 December 2019 at Wayanad, Kerala. Sameer Thahir is the film's cinematographer and the music is composed by Shaan Rahman. It is scheduled for release on Onam 2020 in Malayalam, Tamil, Telugu and Hindi languages.