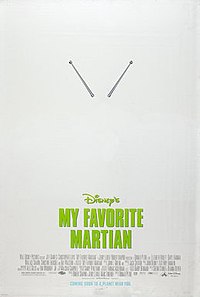 My Favorite Martian is a 1999 American live-action science-fiction comedy film starring Christopher Lloyd, Jeff Daniels, Daryl Hannah, Elizabeth Hurley, Wallace Shawn and Ray Walston, based on the 1960s television series of the same name in which Walston starred. A Mickey Mouse Works short, "Pluto Gets The Paper: Spaceship," was shown in theaters with it.

News producer Tim O'Hara (Daniels) is fired for unwillingly "compromising" reporter Brace Channing (Hurley), the daughter of his boss, Mr. Channing (Michael Lerner), during a live broadcast of the first Space Shuttle launch from Vandenberg Air Force Base. His assistant, Lizzie (Hannah), tries to comfort him and she apparently has a crush on him. Later that night, while driving, Tim witnesses a small Martian spacecraft crash landing. Realizing his chance to deliver a story that will "rock the Earth," he brings Brace to show her the ship, but by the time he reaches the crash site, the ship has been shrunken to toy size. Nearby, its only occupant (Lloyd) hides in the bushes. Tim takes the now-shrunken spaceship home with him and the Martian follows him to retrieve it. After a confrontation, Tim is knocked out and the Martian disguises himself to look like Tim and ends up kissing Lizzie when she visits.