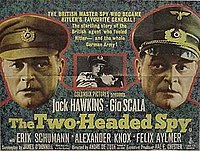 The Two-Headed Spy is a 1958 British spy thriller film directed by Andre DeToth and starring Jack Hawkins, Gia Scala, Erik Schumann and Alexander Knox. The film, which has elements of film noir and is set in the Second World War, was based on a story by J. Alvin Kugelmass called Britain's Two-Headed Spy and is notable for having been scripted by blacklisted writers.

The story commences in 1939. Alex Schottland, a Colonel in charge of supplies in the German Army, is actually a long-entrenched British agent who was planted in Germany toward the end of the First World War. He is growing weary of being a spy, but is urged to continue by his friend and fellow British agent, Cornaz, who is posing as an antique dealer.