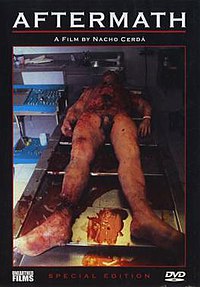 Aftermath is a 1994 Spanish horror short film written and directed by Nacho Cerdà. Containing no spoken dialogue, Aftermath is the second installment in a trilogy of shorts by Cerdà, preceded by 1990's The Awakening, and followed by 1998's Genesis.

A woman named Marta Arnau Marti dies in a car crash, after accidentally running over a dog. An orderly wheels Marta's body into a morgue drawer, past a mourning couple, who a nurse gives a crucifix necklace. The orderly overhears two workers performing autopsies on a pair of male bodies, looks in on them out of curiosity and leaves when one of the morticians (who is disturbingly enthused by his duties) glares at him. The morticians complete their work on the dead men, and while one leaves, the other remains, and brings in Marta's body.