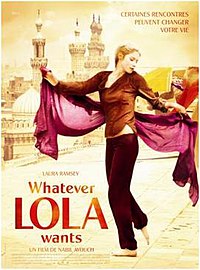 Whatever Lola Wants is a 2007 French-Canadian romantic drama film directed by Nabil Ayouch. The film had its world premiere on December 11, 2007 at the Dubai International Film Festival and stars Laura Ramsey as an American postal worker who travels to Egypt to seek out a legendary belly dancer.

Lola (Laura Ramsey) is a female postal worker that dreams of becoming an oriental dancer. After a friend encourages her to perform at a local restaurant, Lola captures the attentions of the handsome Zack (Assaad Bouab). Lola follows after him, but is crushed to find that Zack is to marry someone of his family's choosing. Lola decides to turn all of her energy into making her dreams a reality and tracks down Ismahan (Carmen Lebbos), a reclusive dancing star that retired due to a scandal involving a mysterious lover. Although reluctant, Ismahan is persuaded into giving Lola lessons and a friendship blossoms as a result. In no time Lola becomes a professional level dancer and attracts the interest of Nasser Radi (Hichem Rostom), a famous impresario. He takes her under his wing and under his tutelage Lola gets to dance at the prestigious Nile Tower. During this time Lola discovers that Nasser was Ismahan's lover and that the two were kept apart because of social conventions but also because of their own pride. As Lola's career takes off, she manages to help reunite the two former lovers before returning to New York in order to take the art she loves to her fellow Americans.