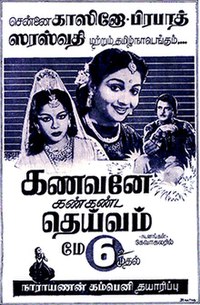 Kanavane Kankanda Deivam is a 1955 Indian Tamil-language fantasy film directed by T. R. Raghunath and produced by Pattanna. The film stars R. Ganesh and Anjali Devi, with V. Nagaiah, M. N. Nambiar, Friend Ramaswamy and Lalitha in supporting roles. It revolves around a man who steals an object to cure the king's blindness and marry the princess, but becomes cursed because of the theft and seeks to undo it.

Vijayan, the son of a retired soldier Karunakaran, is advised by his father to meet Soorasimmar, the blind king, and join the army. Vijayan meets Soorasimmar's only daughter Nalini and falls in love with her. When commander Veerasenan tries to throw Vijayan aside for blocking his way, Vijayan fights and trounces Veerasenan. This impresses Nalini, who is on the way to meet a sage who has a medicine for her father's blindness.