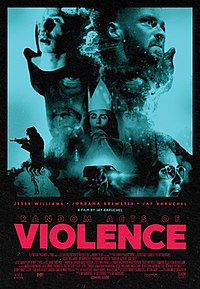 Random Acts of Violence is a 2019 slasher horror film based on the 2010 comic of the same name by Jimmy Palmiotti and Justin Gray. The film is produced and directed by Jay Baruchel, who wrote the screenplay with Jesse Chabot, and stars Jesse Williams, Jordana Brewster, and Baruchel. The film follows Todd Walkley (Williams), a comic book creator whose works are used as inspiration for a string of real-life murders.