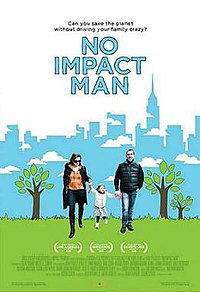 No Impact Man is a 2009 American documentary film directed by Laura Gabbert and Justin Schein, based on the book by Colin Beavan. The film, which premiered September 4, 2009, follows Colin Beavan and his family during their year-long experiment to have zero impact on the environment. The film mostly takes place in New York City.