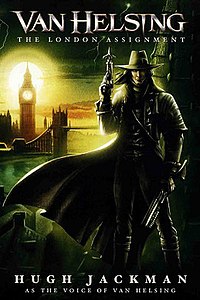 Van Helsing: The London Assignment is a 2004 action horror animated short film by Universal Studios Home Video. It features the voices of Hugh Jackman, Kate Beckinsale, Robbie Coltrane and David Wenham. The London Assignment is an animated prequel to the 2004 motion picture Van Helsing (released the same year). It tells of the events before the film.

Monster hunter Gabriel Van Helsing and friar Carl travel to London to investigate a series of horrific, and decidedly supernatural murders, being committed by the mad scientist Dr. Jekyll, in the form of his evil alter-ego, Mr. Hyde. When tracing Hyde to his underground fortress, Van Helsing and Carl find a young woman who claims to be Queen Victoria, and they discover that Dr. Jekyll is in love with the Queen. In order to keep her young and thus immortal, she has been given a potion by Dr. Jekyll that turns her into a young woman for one night. But, in order to create the potion which causes the transformations, Dr. Jekyll needs the drained souls of his freshly killed victims and thus the killings will never stop.