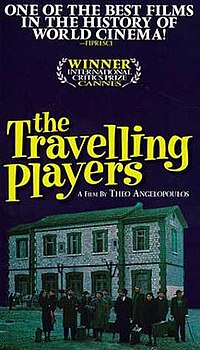 The Travelling Players (, translit.O Thiassos) is a 1975 Greek film directed by Theodoros Angelopoulos that traces the history of mid-20th-century Greece from 1939 to 1952.

A group of travelling players tour through Greece putting on a play called Golfo the Shepherdess. The first level of the film shows them setting up, rehearsing, promoting and performing in fustanella this 1893 piece, a bucolic verse drama of love, betrayal and death. In the next level the film focuses on the historical events between 1939 and 1952 as they are experienced by the travelling players and as they affect the communities which they visit: the last year of Metaxas' authoritarian dictatorship, the war against the Italians, the Nazi occupation, the liberation, the civil war between the government and communist insurgents, and British and American intervention in Greek affairs. In a further level the characters live their own drama of jealousy and betrayal, with its roots in the ancient myth of the House of Atreus. Agamemnon, a Greek refugee from Asia Minor, goes to war against the Italians in 1940, joins the resistance against the Germans, and is executed by them after being betrayed by Clytemnestra and Aegisthos. Aegisthos, Clytemnestra's lover, is an informer and collaborator working with the German occupiers. Orestes, son of Agamemnon and Clytemnestra, fights on the side of the leftists, avenges his father's death by killing his mother and Aegisthos. He is arrested in 1949 for his guerrilla activities and is executed in prison in 1951. Electra, his sister, helps the leftists and aids her brother in avenging the treachery of their mother and Aegisthos. After the death of Orestes she continues the work of the troupe and her relationship with Pylades. Chrysotheme, Electra's younger sister, collaborates with the Germans, prostitutes herself during the occupation, sides with the British during liberation, and later marries an American. Pylades, close friend of Orestes, is a Communist who is exiled by the Metaxas regime, joins the guerrillas and is arrested and exiled again. Finally he is forced to sign a written denunciation of the left after torture by the right wing and he is released from prison in 1950.