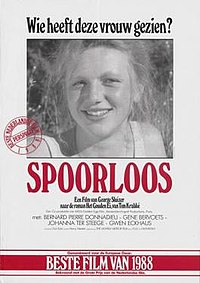 The Vanishing (, literally: "Traceless" or "Without a Trace") is a 1988 thriller film directed by George Sluizer, adapted from the novella The Golden Egg (1984) by Tim Krabbé. It stars Gene Bervoets as a man who searches obsessively for his girlfriend following her disappearance at a rest area.

A young Dutch couple, Rex and Saskia, are on holiday in France. As they drive, Saskia shares a recurring dream in which she is drifting through space in a golden egg. In the most recent dream, another egg containing another person appeared; she feels the collision of the two eggs would signify the end of something.