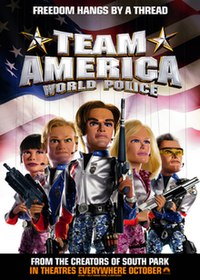 Team America: World Police is a 2004 comedy film directed by Trey Parker and written by Parker, Matt Stone and Pam Brady, all of whom are also known for the popular animated television series South Park. Starring Parker, Stone, Kristen Miller, Masasa, Daran Norris, Phil Hendrie, Maurice LaMarche, Chelsea Marguerite, Jeremy Shada and Fred Tatasciore, the film is a satire of big-budget action films and their associated clichés and stereotypes, with particular humorous emphasis on the global implications of the politics of the United States. The title is derived from domestic and international political criticisms that the foreign policy of the United States frequently and unilaterally tries to "police the world". Team America follows the fictional titular paramilitary police force and their recruitment of a Broadway actor in an attempt to save the world from North Korean dictator Kim Jong-il, who is leading a conspiracy of Islamic terrorists and liberal Hollywood actors in a bid for global destruction.

Team America, a paramilitary counter-terrorist police force, eliminates a gang of terrorists in Paris, accidentally destroying the Eiffel Tower, Arc de Triomphe, and the Louvre in the process. The team includes Lisa, an idealistic psychologist; her love interest Carson; Sarah, a psychic; Joe, a jock who is in love with Sarah; and Chris, a martial arts expert who harbors a phobia towards actors. Carson proposes to Lisa, but a terrorist shoots him dead as he is doing it.