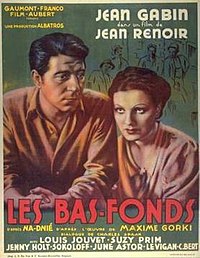 The Lower Depths is a 1936 French drama film directed by Jean Renoir, based on the 1902 play of the same title by Maxim Gorky. Its scenes contrast the life of the upper and lower classes to comedic effect.

A wealthy baron (Jouvet) becomes bankrupt through gambling. Contemplating suicide, he finds his gun missing and confronts the thief Pépel (Gabin) who plans to rob him. Instead they share "a drink between colleagues" in a scene played as light comedy and become friends. The baron allows Pépel to leave with a bronze sculpture. Creditors seize the baron's household furnishings. The Baron tells his servant Félix that he hopes all that Félix has stolen from him will cover his unpaid wages, to which Félix agrees. Pépel is arrested for stealing the bronze. Pépel jokes with the police until the baron arrives to identify him as a "dear friend". The story shifts to life in the slums, where men argue at cards. They mock a woman who reads romantic tales, and many individuals have brief character portraits. The baron arrives to become a lodger in the slums and Pépel sets him up with a bed. The baron joins the card game.