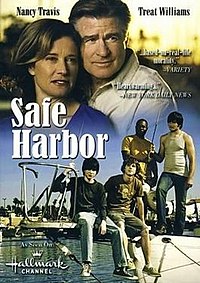 Safe Harbor is a 2009 television film, based on a true story, starring Treat Williams and Nancy Travis. The film was first shown on Hallmark Channel on May 30, 2009.

Doug and Robbie Smith are a happily married, childless couple about to retire and spend their days cruising around the world on their sailboat. But before they have the chance to leave, their good friend, Judge David Roberts, asks them to care for two teenage boys he sentenced to juvenile hall. The facility is currently full and the judge tells the couple that, instead of being sent to county jail, the boys can help them prepare their boat for sailing day. The Smiths agree and soon take on two more boys with similar circumstances.