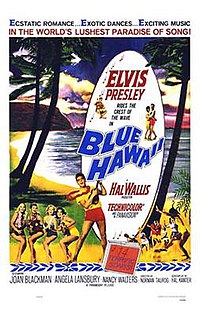 Blue Hawaii is a 1961 American musical romantic comedy film directed by Norman Taurog and starring Elvis Presley. The screenplay by Hal Kanter was nominated by the Writers Guild of America in 1962 in the category of Best Written American Musical. The film opened at number two in box office receipts for that week and, despite mixed reviews from critics, finished as the 10th top-grossing film of 1961 and 14th for 1962 on the Variety national box office survey, earning $5 million. The film won a fourth place prize Laurel Award in the category of Top Musical of 1961.

Having been released from the Army, Chadwick Gates (Presley) is eager to return Hawaii with his surfboard, his beach friends, and his girlfriend Maile Duval (Joan Blackman). His mother, Sarah Lee (Angela Lansbury), wants him to follow in his father's footsteps and take over management at the Great Southern Hawaiian Fruit Company, the family business, but Chad is reluctant and goes to work as a tour guide at his girlfriend's agency. His slightly scatter-brained boss is Mr. Chapman (Howard McNear).