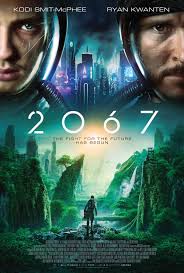 In the year 2067, Earth has been devastated by climate change. With all plant life on Earth extinct, civilization has collapsed around the globe; only one city in Australia has been barely able to hold out against these catastrophic changes, thanks to synthetic oxygen produced by the Chronicorp corporation. However, this oxygen is tainted and gradually causes a deadly affliction known as The Sickness.