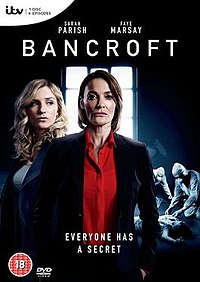 Bancroft is a British television thriller series that began airing on ITV on 11 December 2017. The series was produced by Tall Story Pictures for ITV, and distributed worldwide by ITV Studios Global Entertainment. It was created and written by Kate Brooke. A second series was broadcast in January 2020. On 3 November ITV cancelled Bankcroft after two seasons.