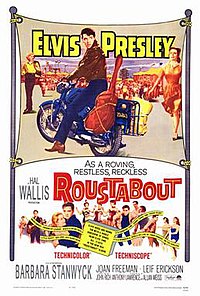 Roustabout is a 1964 American musical feature film starring Elvis Presley as a singer who takes a job working with a struggling carnival. The film was produced by Hal Wallis and directed by John Rich from a screenplay by Anthony Lawrence and Allan Weiss. The screenplay was nominated for a Writers Guild of America award for best written American musical although Roustabout received a lukewarm review in Variety. The film's soundtrack album was one of Elvis Presley's most successful, reaching no. 1 on the Billboard Album Chart.

Musician Charlie Rogers is fired from a job at a teahouse after brawling with several college students in the parking lot. After a night in jail, Charlie hits the road on his Honda 305 Superhawk motorcycle. He spots Cathy Lean driving with her father Joe, and their employer, Maggie Morgan. When Charlie tries to become friendly with Cathy, Joe forces him off the road and the bike is wrecked after crashing into a wooden fence.