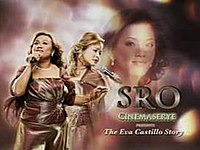 SRO Cinemaserye is a Philippine television drama anthology broadcast by GMA Network. It premiered on March 26, 2009. The show concluded on April 8, 2010 with a total of 35 episodes.

SRO Cinemaserye is a refreshing venture on drama anthologies in late-night primetime. Every story, which will run for eight weeks, boasts of a presentation with the cinematic quality of a motion picture. GMA Network artists will be put on spotlight on SRO Cinemaserye's finest episodes with heart-rending storyline and absorbing characterization.