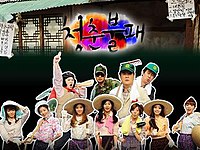 Invincible Youth is a South Korean variety show which aired its first season on KBS2 from October 23, 2009 to December 24, 2010. Season 1 featured seven girls (collectively known as G7) from K-pop idol groups wherein they experience how it is to live and survive in the Korean rural outdoors. It started its second season on November 12, 2011 featuring eight girls.